Differences Between MCU and MPU Development

This training is for the embedded systems software developer who wishes to use the MPLAB® Harmony 3 Software Framework or Embedded Linux® with Microchip Technology’s 32-bit Microprocessor Units (MPUs) (SAM9x60, SAMA5D2).

In this training, we compare and contrast the differences between MCUs and MPUs. It aims to assist you in selecting the right processor for your application and get you started quickly with MPU development.

The difference between MCU and MPU development is primarily due to their hardware architecture and software development methodologies. Not long ago the distinction was easy to see. However, as silicon chip processes improved, the differences have grown closer in recent years making it difficult to distinguish them.

Subjects covered in this topic:

Differences Between MCU and MPU Development

In the beginning, there were MPUs. They required a host of support chips – memory, Input/Output (I/O), and peripherals – to create a complete computing system. They were (and still are) the main processing unit(s) in personal computers and servers. Back in the day, you rarely saw MPUs in an embedded application as they took up a great deal of space and were expensive. 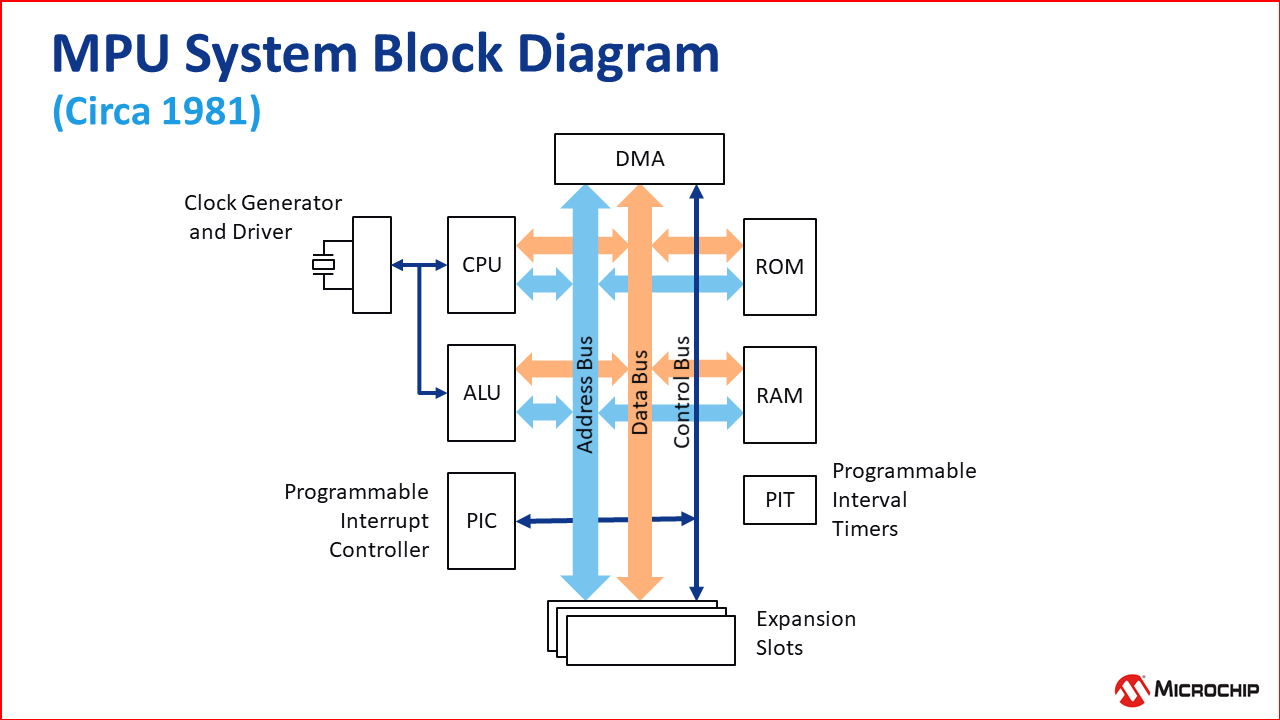 Along came MCUs. A major difference is that MCUs are generally all-in-one devices containing CPU, ALU, programmable Non-Volatile Memory (NVM) (Flash), volatile Static Memory (SRAM), and a host of peripherals (UART, ADC, etc.) in a single package. Support chips were no longer required. MCUs were primarily developed for embedded applications, both for specific (for example, motor control) and general purposes.

The majority of embedded applications require minimal resources and processing power. Thus, MCUs tend to be much smaller, and consequently, lower in cost, limited in processing power (as compared to MPUs), memory, and peripherals. However, as silicon chip processes improved, allowing for more transistors per die, MCU capabilities increased, and today their processing capabilities have grown closer to MPUs. MCU software development also became more sophisticated. Real-Time Operating Systems (RTOS) was introduced to satisfy applications that require strict timing requirements and ease of programming. RTOS allows for software libraries and network stacks that can be reused. With all of these improvements, MCUs are now seen in computational demanding applications that once were the realm of MPUs.

In contrast, MPU hardware became more integrated requiring fewer support chips, making them look more like their all-in-one MCU cousins. As processing capabilities of embedded designs grew, adding sophisticated graphics and networking capabilities, MPUs entered into the embedded world. A major benefit of MPU software development is the ability to run operating systems; the popular open-source Linux operating system and sophisticated RTOS. Thus today, MPU and MCU hardware architecture and software development have grown toward each other and their differences are now closer to each other.

In the next two sections, we’ll explore in more detail the hardware architecture and software development mythologies of MCUs and MPUs.

MCU’s contain all of the support circuitry such as oscillators for the master clock, timers/counters, watchdog timers, and reset circuitry. Onboard voltage regulators take a single input voltage (often 3.3 or 5.0 volts) and create the ancillary voltages required for each of the circuit blocks of the MCU. Upon power-on-reset, an MCU will begin running the program code that is stored into its internal Flash memory. Depending on the relative size of the MCU, especially for the smaller devices with limited I/O pins, debug and test circuitry may be limited or omitted entirely.

MCU’s come in many different package types, sizes, and combinations of features allowing the developer to select the one that has the best mix of features for a given application.

In contrast, MPUs differ in hardware architecture in the following areas: 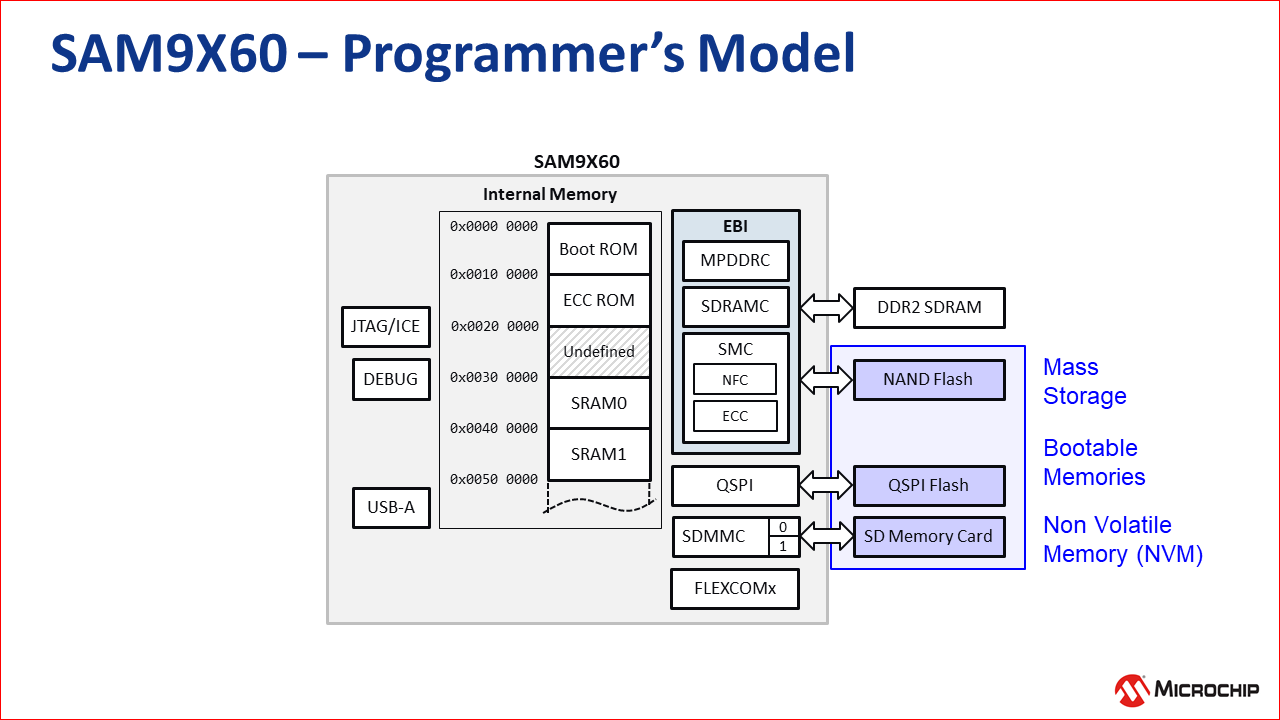 External volatile memory refers to the main memory that is directly addressable by the MPU and used for the execution of program code (instructions). MPUs contain only a small amount of internal SRAM for registers and main memory. There’s just enough internal SRAM that the MPU can load the second-stage bootloader (bootloaders are covered in the "Software Development Methodologies" section below). Therefore, MPUs rely on external volatile memory for main memory.

It is up to the developer to select the type and the amount of external volatile memory for the application. There are two popular technologies:

Applications that require large amounts of external volatile memory are: 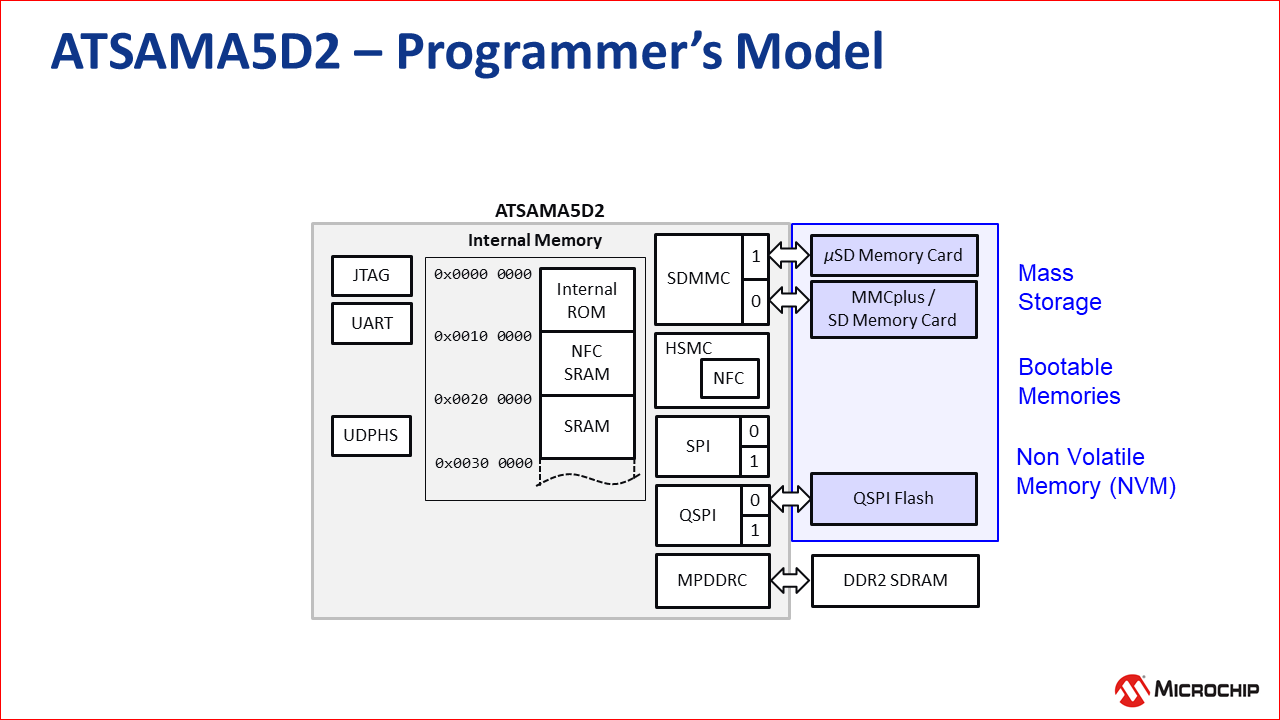 Flash memory technology is a popular choice as it can be electrically erased and reprogrammed. There are three categories of Flash memory:

The purpose of the first-stage bootloader is to:

More information about the first and second-stage bootloaders is explained in the "Software Development Methodologies" section below.

MPU’s contain a Memory Management Unit (MMU) that performs the translation of virtual memory addresses to physical addresses and controls access to and from external memory. The MMU allows the MPU to address a greater address space that is physically limited on MCUs. 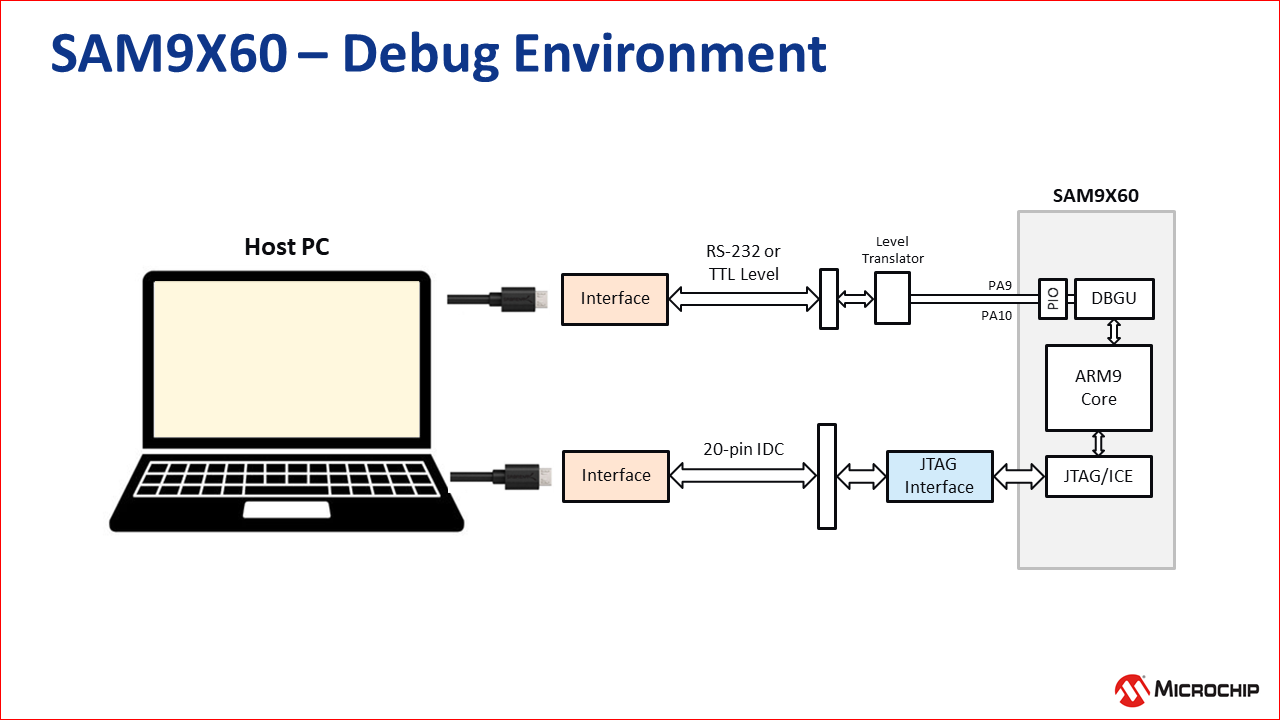 To aid the developer, and reduce the hardware complexity, MPUs are available in:

In addition, reference designs are available for developers to use in their hardware development.

MCU software development is generally performed on a host computer using an IDE and cross-compiler.

The capabilities of MCUs depend on the size and combination of features for a given MCU. Once an MCU is selected for an application, those features are fixed.

Small, resource-limited MCUs are often programmed at the hardware level (often called bare metal programming) using a round robin or state machine to control subroutines in the application. Larger MCUs with more resources can run an RTOS to satisfy applications that require strict timing requirements and ease of programming.

Software libraries are available from vendors to initialize a device and its peripherals. Software stacks for networking and for specific purpose applications (for example, motor control, switch mode power supplies, etc.) are generally available from the manufacturer and third-party vendors.

Upon power-on-reset, an MCU will begin executing the program code that has been uploaded to its program memory (also called Flash memory). Thus, the developer is responsible for how the MCU will initialize itself and start the program.

If the embedded application requires sophisticated graphics (video, 3D, touch) and/or networking capabilities (Ethernet, Wi-Fi® Bluetooth®), MPUs are a good choice as they generally have greater processing capabilities than MCUs and are capable of running operating systems such as the popular open-source Embedded Linux and sophisticated RTOS.

MPU software development is generally performed on a host computer using an IDE and cross-compiler.

The capabilities and resources of MPUs are greater than MCUs. Internally they host an advanced architecture CPU, Floating Point Units (FPU), sophisticated instruction and data cache, high speed bus interfaces to on-chip peripherals for graphics, communications, interface, analog (ADC and DAC), and multiple memory interface peripherals for a large selection of external memory types. Externally the MPU system includes the developer’s choice of volatile and NVM that fits the application.

The purpose of the first-stage bootloader is to:

The second-stage bootloader, at91bootstrap, is an external program, available in source code format. It is written and maintained by Microchip Technology and hosted on GitHub. The developer downloads, configures, and builds it according to the project’s hardware and software requirements. Or the developer can use a pre-compiled version, provided it has the correct configurations for the application.

The purpose of the second-stage bootloader, at91bootstrap, is to:

Embedded Linux is a popular choice for MPU development. It is much more than just an operating system. It is a large collection of software libraries, device drivers, networking stacks, software applications, and tools to choose from. There are thousands of developers contributing to its open-source model. And there is a large online community providing tutorials and answering questions in forums to aid the developer.

Presently, there are two RTOS’s that are supported for Microchip's MPUs:

The MPLAB Harmony 3 Software Framework is a comprehensive collection of software libraries and tools for the software developer to manage, configure, and generate source code for Microchip Technology branded MPUs. The developer can choose the level of development that best suits their application. The framework includes many example applications to enable the developer to get started quickly.

More can be learned at:

From a hardware architecture perspective, MPUs require external support chips to create a complete embedded system whereas MCUs are all-in-one package solutions. For a complete MPU system, the developer has to select power management circuitry, external volatile, and NVM. This flexibility allows the circuit designer to select the size and type of memory technologies required for the application. To simplify integration, MPUs are available in System in Package (SiP) and System on Modules (SoM). In addition, reference designs are available from Microchip Technology Inc.

From a software development methodology perspective, an MPU “boots” binary files stored in external NVM and begins execution. The developer must be knowledgeable of the bootloader process and its stages. Binary files created on the host are uploaded to the target system’s external NVM using a Debug Probe or the SAM-BA® In-System Programmer utility program.

MPUs offer the ability to run larger and feature-rich operating systems such as Embedded Linux and sophisticated RTOS. Both offer a large collection of software libraries, device drivers, networking stacks, software applications, and tools to choose from.

Learn more about the MPLAB ecosystem: