Variable
A variable is the combination of a data type and an identifier (name) that represents one or more memory locations used to hold a program's data.

Looking at the simple C program we saw two pages back, we can observe the three topics of this section in action. 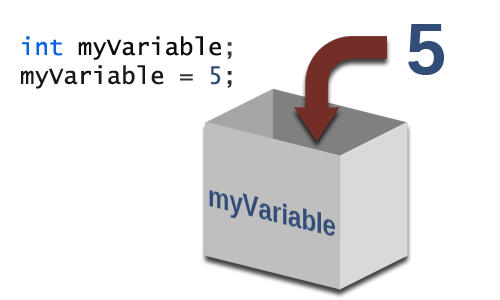 A variable must be declared before it can be used, as shown above. The declaration of a variable consists of two parts: 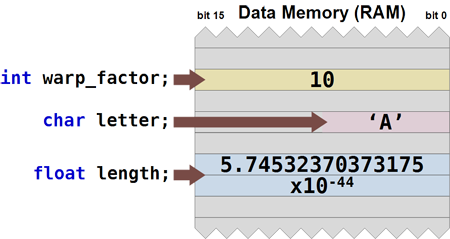 To the right is a visual representation of how three variables might be stored in the 16-bit wide data memory of a PIC24 family device (there wouldn't actually be gaps between them).

The first variable warp_factor is of type int which is defined as a 16-bit value in the MPLAB® XC16 Compiler, so it takes one complete word (two bytes) of data memory.

The second variable letter is of type char which is almost always an 8-bit value - only compilers with Unicode support might define it otherwise. So, it takes up one byte or a half of a word of data memory. If other char type variables were declared, a second one would be packed into the same word as the first, so both bytes would be occupied.

The third variable length is of type float which is usually a 32-bit value with most compilers. It takes up two full words or 4-bytes of data memory. It's data is also encoded (not shown) in a modified form of the IEEE-754 floating point format, so it needs to be handled differently from int and char type variables.